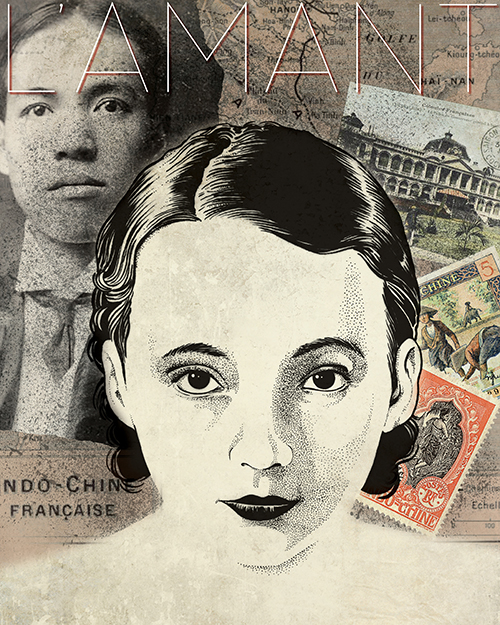 The Lover (L’Amant) is an autobiographical novel published in 1984. It has been translated into 43 languages, was awarded the 1984 Prix Goncourt and was adapted to film in 1992. Duras published The Lover when she was 70, 55 years after she met Léo, the Chinese man of her story. She never revealed his surname.

Duras was born in Giadinh, near Saigon, what was then French Indochina. Her father died in 1918, leaving Marguerite, two brothers and her mother practically destitute. In 1924 her family moved to Vinhlong, where a new French governor arrived from Laos with his wife, a pale beauty named Elizabeth. It was rumored that the wife had a young lover in Laos who killed himself when she left him. The news of this suicide had a searing effect on the imagination of Duras, for whom the woman came to represent a dark, mythic feminine power. “Many times I have said to myself,” Duras told the critic Michelle Porte, “that I am a writer because of her.”

“She says, I’d rather you didn’t love me. But if you do, I’d like you to do as you usually do with women. He looks at her in horror, asks, Is that what you want? She says it is. He’s started to suffer here in this room, for the first time, he’s no longer lying about it. He says he knows already she’ll never love him. She lets him say it. At first she says she doesn’t know. Then she lets him say it.
He says he’s lonely, horribly lonely because of this love he feels for her. She says she’s lonely too. She doesn’t say why. He says, You’ve come here with me as you might have gone anywhere with anyone. She says she can’t say, so far she’s never gone into a bedroom with anyone. She tells him she doesn’t want him to talk, what she wants is for him to do as he usually does with the women he brings to his flat. She begs him to do that.”
-The Lover (1984)