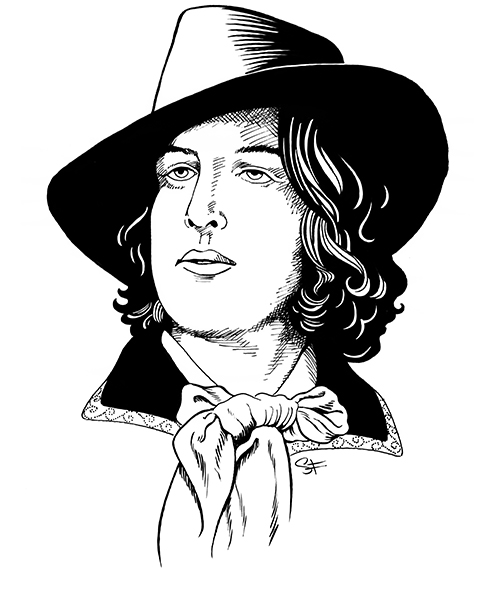 “The very aspect of the world will change to our startled eyes. Out of the sea will rise Behemoth and Leviathan and sail round the high-pooped galleys, as they do on the delightful maps of those ages when books on geography were actually readable. Dragons will wander about the waste places, and the phoenix will soar from her nest of fire into the air. We shall lay our hands upon the basilisk, and see the jewel in the toad’s head. Champing his gilded oats, the Hippogriff will stand in our stalls, and over our heads will float the Blue Bird singing of beautiful and impossible things, of things that are lovely and that never happened, of things that are not and that should be. But before this comes to pass we must cultivate the lost art of Lying.”

“Art never expresses anything but itself. It has an independent life, just as Thought has, and develops purely on its own lines. It is not necessarily realistic in an age of realism, nor spiritual in an age of faith. So far from being the creation of its time, it is usually in direct opposition to it, and the only history that it preserves for us is the history of its own progress.”

In 1895, at the height of his fame and success, Wilde was arrested and tried for gross indecency with men (his relationship with Lord Alfred Douglas was consensual). After two additional trials he was convicted and sentenced to two years’ hard labour, the maximum penalty, and was jailed from 1895 to 1897.
On his release, Wilde spent his last three years impoverished and in exile in France, never returning to Ireland or Britain. He wrote two long letters to the editor of the Daily Chronicle, describing the brutal conditions of English prisons and advocating penal reform.
Confined to his hotel due to encounters with hostile English visitors, he joked during one of his final trips outside, “My wallpaper and I are fighting a duel to the death. One of us has got to go”. Through it all, he never lost his wit.
Oscar Wilde died 30 November 1900, at the age of 46.

And alien tears will fill for him
Pity’s long-broken urn,
For his mourners will be outcast men,
And outcasts always mourn.